Woodbridge Wireless, Inc. (WWI) has been participating in Field Day for a long time – and has become very good at it. Are we prepared for emergency communications? You bet – Antennas, towers, generators, radios, trained operators, an emergency communications vehicle, and all the fixins. With all this experience and equipment, we wanted to spread the magic of radio to kids – a challenging endeavor, if you haven’t tried it. 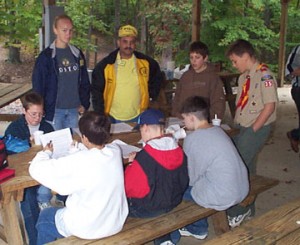 WWI has conducted amateur radio demos in various schools over the years, and even sponsored a school radio club in one of the local high schools, all with marginal results. With several of the club member’s kids participating in scouting, we decided to sponsor our first Jamboree On The Air (JOTA), in 1992. What we found is that unlike the school situation, scouts were primed for amateur radio. In fact, the “amateur radio code” is very similar to the “scout law”. The younger scouts have a communicators award (belt loop), and the older scouts have the Radio Merit Badge, which both tie into amateur radio quite nicely.

After WWI’s first JOTA, held at the Quantico Marine Corps base, of the 18 scouts participating, 5 went on to get their ham radio license. In October 1993, WWI sponsored its 2nd JOTA, with even better results. Each year, the WWI JOTA effort was expanded in size and scope, with corresponding success. 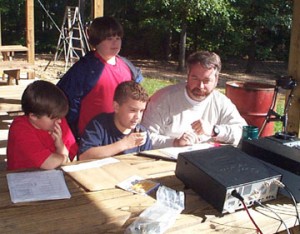 In 1997, a fall camporee for the Prince William District coincided with the JOTA weekend. What an opportunity – WWI would be able to bring JOTA to the scouts in the field. Here’s where all that field day experience really helped. With our emergency communications vehicle, 7KW generator, four HF stations, two VHF stations, an ASPR set-up, ham radio videos, and Radio Merit badge class material ready to go; 14 WWI members introduced over 500 scouts to amateur radio in one weekend. In the rain (of course), two yagis and two dipoles were set up. One yagi was mounted on the club’s bus mounted tower. The second yagi was mounted on a military crank-up tower, fondly referred to as the “rocket launcher”. Many of the scouts received their first taste of amateur radio and really enjoyed it. About 500 scouts watched amateur radio videos, received ARRL brochures, and talked on the air. Twenty and forty meters where the most popular positions, with the scouts talking to other scouts around the country. I questioned the decision to use my call when bedlam broke out on 40 meters several times during the day, but it was worth it. Scores of scouts earned their JOTA patch, and 21 scouts completed their Radio merit badge – no simple feat. Several scouts signed up for ham radio classes to get their license, and many seeds were planted. A week after JOTA 97, one parent called me up to say that her son is so excited about radio that he no longer wanted a go-cart for Christmas – instead he wanted a ham radio. She thanked me profusely. They have stopped in the local radio store several times, while the youngster was studying for his exam.

JOTA 1998 was a ditto of JOTA 1997. In 1999, JOTA did not coincide with the local scout Fall Camporee, so WWI set up JOTA stations at the Elks Lodge outdoor pavilion. The photos below tell the story. We even had a “JOTA graduate” from years before get his ham license, join WWI, and serve as a JOTA and scout merit badge instructor. 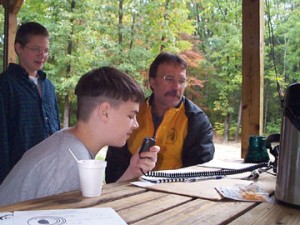 The WWI volunteers really enjoy themselves helping kids have fun with amateur radio. Many have already signed up for the next JOTA. Please use your expertise to participate in JOTA for your local scouts. You will find that the scouts provide the most fertile ham radio potential. If you can’t make it to the next JOTA, then please answer the scout’s call when you hear “CQ Jamboree On The Air”.