This third Woodbridge Wireless DXpedition was really a club effort. Besides the seven team members that went on the DXpedition, support from the club at home was great – airport transportation, dozens of on-the-air contacts, and an all night QSLing party after the trip.

The Montserrat DXpedition team really had a great time, but it took a lot of advanced planning. Denis WD4KXB (now W4DC), John WB4NFS (now W4NF), and Ed KJ4VG (now K5OF), started planning for this March 1995 DXpedition in July 1994. The planning effort is a story in itself – however to make a long story short, 21 major tasks were divided up among the seven team members. For example, once we picked the country, and assembled the team, John was in charge of accommodations, Ed was in charge of equipment and customs, and Denis was responsible for the licensing and publicity. We divided the remaining tasks between the rest of the team members – Mike KA4RRU, Cliff KO4FM (now W4CE), Bob W4MYA (from Richmond), and Jeff, W2HPF (from Rochester, N.Y.). 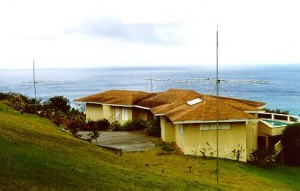 Getting to Montserrat wasn’t easy. Since the very small island (only 12 miles long and 7 miles wide) has a very small airport, it cannot accommodate jet aircraft. Therefore, it took a minimum of three flight changes to get there, the last being on a small prop aircraft. Three members actually took two days to get to the island. Going through the numerous airline check-in, security points, immigration checks, and customs also required a great amount of patience. Many of us were charged over-weight fees because of the hundreds of pounds of equipment we were carrying. We brought everything with us (three amps, two A3 beams, three transceivers, tools, guy stakes, 800 feet of coax, etc.). The only item that we didn’t carry with us were antenna masts/towers. We purchased 60 feet of two inch water pipe on the island to support the antennas. The villa that we rented was fantastic – high on a mountain, over-looking the Carribean to the States. Things really came together. The only problems encountered, besides having no food for the first night, were one amp failure during the contest, and one computer failure before the contest. Many challenges were meet with the combined ingenuity of the group. The 220 circuit required some rewiring the amps directly into the wall circuits. Our operating plan essentially solved the problem of not being able to link the computers. The team operated RTTY and CW with limited phone operations before and after the contest. Most efforts prepared us for the ARRL phone contest. Strategy and training sessions continued right up to the start of the contest. We operated multi-two, and basically followed a three hour rotating operating schedule. It was great to hear all the Woodbridge Wireless members working us on several bands. Two members K8MLM and K4HWG (now W4AD) actually worked us on all 6 bands (160M-10M). Here is the breakdown of results:

The complete story of this DXpedition was featured in the January 1996 issue of the DX Magazine. QSL card requests go to W4DC. A 30 minute professional video, which really tells the story, is available on loan from W4DC. Thanks again for working us in the contest. 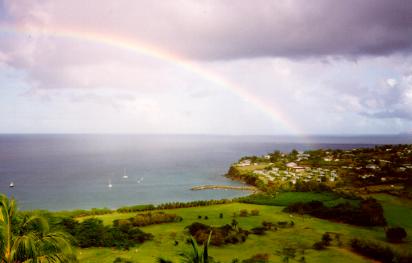