WOODBRIDGE WIRELESS FIRST DXPEDITION
ZF2HI – THE STORY
At the Woodbridge Wireless club Christmas party in December 1985, a few hams had some holiday cheer and started talking about going on a DXpedition coinciding with the 1986 ARRL International DX Contest in March. President of WWI, Rick Norton – KZ2E, Secretary of WWI, Marlis Norton – N4MZJ, and WWI member, Denis Catalano – WD4KXB (now W4DC), set the idea in motion, and after a few days of discussion over the local repeater, decided that the Cayman Islands (ZF) would be the ideal place to go – licenses were easy to get, it wasn’t too far from the states, and Rick and Marlis had been there before. 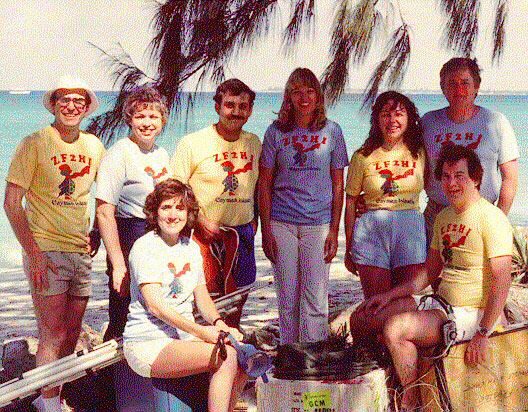 Marlis took on the task of finding lodging for the group. Her only direction was to find a place with a tower. Rick took on the task of rounding up some equipment, and Denis took on the task of finding a few more people to share the fun, help defray the cost, and help operate during the contest. Time was running out, with only two months before the contest. Denis placed an article in one of the DX bulletins announcing our intentions and inviting some hams to come along. One of Rick’s friends Jeff Ach, W2HPF (now W2FU) said he might go. Also, Everett Jackson, WA8CZS (now WZ8P), whom none of us had met before, called and said he would meet us at the Cayman airport on February 25th. We asked him to bring some coax and be ready to climb a tower. The only equipment Rick managed to round up was his TS-930 and a 3-element tri-band beam. Denis put together all the odds and ends, and the wire antennas for 40, 75, and 160 meters. Marlis finally found us a place through a realtor. It was on Seven Mile Beach on Grand Cayman. The Realtor said that it was the only rental on the Island with a tower and it was available from the 25th of February to the 4th of March. Things looked promising for us to have a good time, but to win the ARRL Multi-Single World Phone, not likely, nor did it cross our minds. A TS-930 (and no computer) and a few hams, most of whom never met each other, didn’t look like one of the major contest winning DXpeditions, but that’s not what we were after. We were after having some hamming fun on vacation.

On the 25th of February 1986, Rick, Marlis, Denis, and Beth (WD4KXB’S XYL) landed at Cayman’s Owen Roberts airport after a harrowing flight on a small prop plane from our intermediate stop in Puerto Rico. After clearing customs, we met Everett Jackson from Ohio, just as he promised. We found our lovely, but expensive house on the beach with a very nice crank-up tower, also as promised. We erected all the antennas that afternoon and got on the air that evening and really had a blast. While on 75 meters that first evening, we got a call from Jeff, who was still in New York. He said our signal was not that strong on 75. This didn’t make us feel all that great, but it didn’t lessen our fun. Two days later, Jeff shows up at the Cayman airport with his XYL and an Alpha amp – a most pleasant surprise. Things were really starting to shape up. Jeff also seemed to be more experienced at contesting, and gave the rest of us a crash course. We all received our own amateur licenses – Everett ZF2AC, Jeff ZF2GW, Rick ZF2HI, Marlis ZF2HJ, and Denis ZF2JD. We used our own calls during the days preceding the contest, but decided to use Rick’s call for the contest since he thought of this great idea and had the highest class Cayman license. We had time that week to enjoy the Caymans – snorkeling, diving, shopping, and to touring the Island. The sites included a turtle farm, a castle, the bat cave (not to be confused with the garage of our stateside hero), and many lovely coves and beaches. We were also visited by some of the local hams who were very courteous.

It was certainly a great amateur radio experience and we did it without a lot of equipment, and without a computer (all hand logged). What we did have was a lot of fun. The moral of the story is you don’t have to be a big gun contester or DXer, or belong to a DX or Contest Club to have a lot of fun and maybe even win once in a while. QSLs were furnished by EGE Woodbridge (now HRO). QSLs requests for ZF2HI go to Denis, W4DC.