The focus of this WWI DXpedition was choosing a relatively rare DX multiplier, which was low cost. One major cost of any DXpedition is usually the transportation cost. The 1991 CQ World Wide (CQWW) phone contest was coming up, in which zones are multipliers. After examining the CQ zone map, it was noticed that a relatively rare zone was within driving distance – ZONE 2. Numerous DX stations around the world especially need zone 2 to complete their Worked All Zones (WAZ) award. After a few days of research, the solution of where to go was solved. The city of Septiles (Seven Islands), Canada was within driving range of Virginia, had relatively good roads leading there, and was just north of the 50th parallel placing it in CQ zone 2. Denis, WD4KXB (now W4DC) and Ed, KJ4VG (now K5OF) decided to put this low budget DX adventure on the air for the CQWW Phone contest in October 1991. It turned out to be another great DX experience. 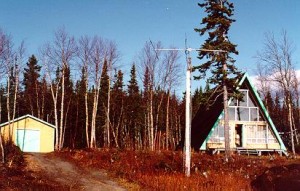 With a tight budget, Ed and Denis loaded up a van with antennas, radios, computers, and a tower. They drove 22 hours; took a two hour ferry ride; and then drove three more hours to make it to Septiles, Canada. The scenery along the way was beautiful. The evening they arrived, a 40M inverted-vee was erected in the snow and sleet. Of course, that antenna worked the best. The next morning a tower with a tribander for 10/15/20M, and 80M and 160M inverted-vees were erected in relatively mild weather. We met a few of the local hams from the Septiles Radio club including Jean Claude, VE2XY, who acted as our host and found our accommodations. He was one of the few people met that spoke English. It was surprising how few people could speak English. French was the norm. The “shack” was a very nice A-frame Swiss chalet on the Gulf of St. Lawrence. The beach was very attractive, but our host said very few people ever swim because the water remains very cold all year round. He mentioned that icebergs can be found not too far up the coast. Whale watching, fishing, and hunting are the main tourist attractions around the area. Instead of the normal watch for the “Deer” road signs, there were watch for the “Moose” signs. 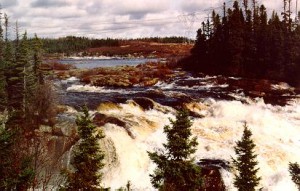 Before the contest, several hundred stations were worked, mostly on phone, some on RTTY and a few on CW. When the contest got underway propagation was very strange. Later, it was found that there was a solar disturbance in progress, which, being so far North, accounted for the Aurora witnessed. In fact, solar flares occurred on October 24th and 26th, resulting in an A-index of 22 for most of the contest. Considering the propagation and the long call (WD4KXB/VE2), the DXpedition still ended up having 2,963 QSOs and 1,914,528 points during the CQWW Phone contest. This was a zone 2 record for a number of years. Many new hams were worked on 10 Meters, and many hams, including JAs, worked zone 2 on several bands for a new zone. This DXpedition also paved the way for many other DXers to put zone 2 on the air. 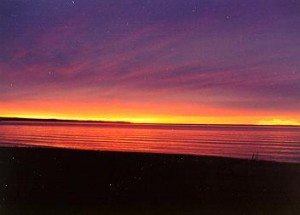 So there you have it – A low budget DXpedition with the excitement of pileups, weather variations, and being in a foreign country – language barriers and all. The cost? -just $600 U.S. each which included renting a van. With an additional two persons, one of which had a van, the cost per person could have well been $300 each – about the price of new finals for an SB-220. So to have great fun on a DXpedition, you don’t have to travel great distances to some uninhabited island, or spend a lot of money. A very nice picture QSL sporting this sunrise photo is available via W4DC.